A Letter from Some Friends in Oakland Regarding the Jan. 28th Events

Let us start by apologizing; that our words may be incoherent, our thoughts scattered and our tone overly emotional. Forgive us, because the ringing in our ear continues to interrupt our thinking, because our eyes are bleary and we’re weighed upon by the anxiety and trauma of our injuries and the imprisonment of the ones we love. As most of you are well-aware: after a full day and night of street battles in Oakland, we were defeated in our efforts to occupy a large building for the purposes of establishing an social center. We’re writing, in part, to correct the inaccuracies and mystifications spewed by the scum Media. But more so as to convey the intensity and the urgency of the situation in Oakland to comrades abroad. To an extent, this is an impossible task. Video footage and mere words must inevitably fail at conveying the ineffable collective experiences of the past twenty-four hours. But as always, here goes.

Yesterday was one of the most intense days of our lives. We say this without hyperbole or bravado. The terror in the streets of Miami or St. Paul, the power in the streets of Pittsburgh or Oakland’s autumn; yesterday’s affect met or superseded each of these. The events of yesterday confronted us as a series of intensely beautiful and yet terrible moments. 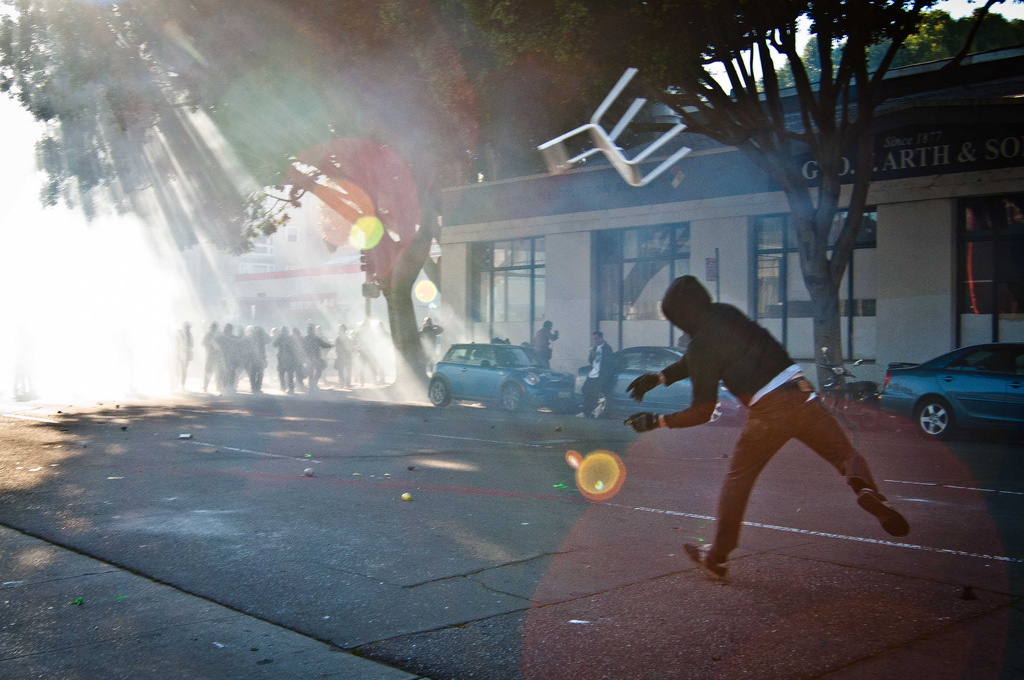 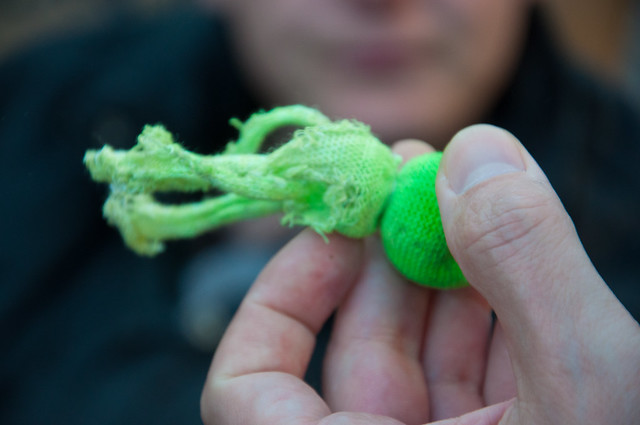 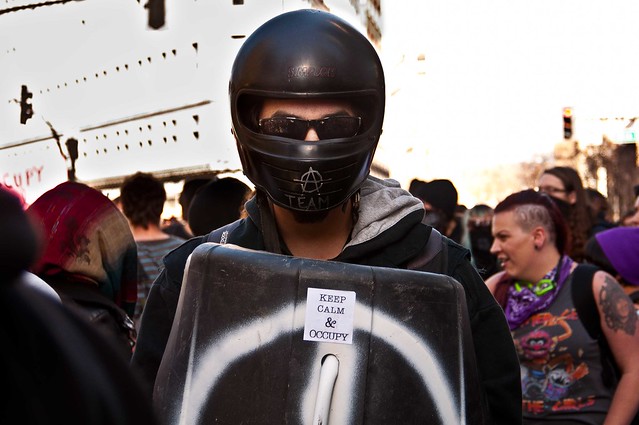 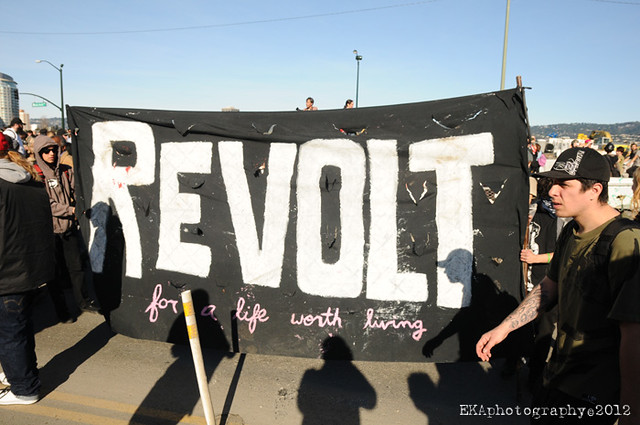 Beautiful words are delivered at Oscar Grant Plaza, urging us to cultivate our hatred for capitalism. Hundreds leave the plaza and quickly become thousands. The police attempt to seize the sound truck, but it is rescued by the swarming crowd. We turn towards our destination and are blocked. We turn another way and are blocked once more. We flood through the Laney campus and emerge to find that we’ve been headed off again. We make the next logical move and somehow the police don’t anticipate it. We’re closer to the building, now surrounded by fences and armed swine. We tear at the fences, downing them in some spots. The police begin their first barrage of gas and smoke. The initial fright passes. Calmly, we approach from another angle.

The pigs set their line on Oak. To our left, the museum; to our right, an apartment complex. Shields and reinforced barricades to the front; we push forwards. They launch flash bangs and bean bags and gas. We respond with rocks and flares and bottles. The shields move forward. Another volley from the swine. The shields deflect most of the projectiles. We crouch, wait, then push forward all together. They come at us again and again. We hurl their shit, our shit, and whatever we can find back at them. Some of us are hit by rubber bullets, others are burned by flashbang grenades. We see cops fall under the weight of perfectly-arced stones For what feels like an eternity, we exchange throws and shield one another. Nothing has felt like this before. Lovely souls in the apartment building hand pitchers of waters from their windows to cleanse our eyes. We’ll take a moment here to express our gratitude for the unprecedented bravery and finesse with which the shield-carrying strangers carried out their task. We retreat to the plaza, carrying and being carried by one another.

We re-group, scheme, and a thousand deep, set out an hour later. Failing to get into our second option, we march onwards towards a third. The police spring their trap: attempting to kettle us in the park alongside the 19th and Broadway lot that we’d previously occupied. Terror sets in; the’ve reinforced each of their lines. They start gassing again. More projectiles, our push is repelled. The intelligence of the crowd advances quickly. Tendrils of the crowd go after the fences. In an inversion of the moment where we first occupied this lot, the fences are downed to provide an escape route. We won’t try to explain the joy of a thousand wild-ones running full speed across the lot, downing the second line of fencing and spilling out into the freedom of the street. More of the cat and mouse. In front of the YMCA, they spring another kettle. This time they’re deeper and we have no flimsy fencing to push through. Their lines are deep. A few dozen act quickly to climb a nearby gate, jumping dangerously to the hard pavement below. Past the gate, the cluster of escapees find a row of several unguarded OPD vans: you can imagine what happened next. A complicit YMCA employee throws opens the door. Countless escape into the building and out the exits. The police become aware of both escape routes and begin attacking and trampling those who try but fail to get out. Those remaining in the kettle are further brutalized and resign to their arrest.

A few hundred keep going. Vengeance time. People break into city hall. Everything that can be trashed is trashed. Files thrown everywhere, computers get it too, windows smashed out. The american flags are brought outside and ceremoniously set to fire. A march to the jail, lots of graffiti, a news van gets wrecked, jail gates damaged. The pigs respond with fury. Wantonly beating, pushing, shooting whomever crosses their path. Many who escaped earlier kettles are had by snatch squads. Downtown reveals itself to be a fucking warzone. Those who are still flee to empty houses and loving arms.

A war-machine must intrinsically be also a machine of care. As we write, hundreds of our comrades remain behind bars. Countless others are wounded and traumatized. We’ve spent the last night literally stitching one another together and assuring each other that things will be okay. We still can’t find a lot of people in the system, rumors abound, some have been released, others held on serious charges and have bail set. This care-machine is as much of what we name the Oakland Commune as the encampment or the street fighting. We still can’t count the comrades we can’t find on all our hands combined.

We move through the sunny morning and the illusion of social peace has descended back upon Oakland. And yet everywhere is the evidence of what transpired. City workers struggle to fix their pathetic fences. Boards are affixed to the windows of city hall and to nearby banks (some to hide damage, others simply to hide behind). Power washer try to clear away the charred remains of the stupid flag. One literally cannot look anywhere along broadway without seeing graffiti defaming the police or hyping our teams (anarchy, nortes, the commune, even juggalos). A discerning eye can still find the remnants of teargas canisters and flashbang residue. At the coffeeshops and delis, friends and acquaintances find one another and share updates about who has been hurt and who has been had. Our wounds already begin to heal into what will eventually be scars or ridiculous disfigurements. We hope our lovers will forgive such ugliness, or can come to look at them as little instances of unique beauty. As our adrenaline fades and we each find moments of solitude, we are each hit by the gravity of the situation.

Having failed to take a building, our search continues. We continue to find the perfect combination of trust, planning, intensity and action that can make our struggle into a permanent presence. The commune has and will continue to slip out of time, interrupting the deadliness and horror of the day to day function of society. Threads of the commune continue uninterrupted as the relationships and affinity build over the past months. An insurrectionary process is the one that emboldens these relationships and multiplies the frequency with which the commune emerges to interrupt the empty forward-thrust of capitalist history. To push this process forward, our task is to continue the ceaseless experimentation and imagination which could illuminate different strategies and pathways beyond the current limits of the struggle. Sometimes to forget, sometimes to remember.

We’ll conclude with a plea to our friends throughout the country and across borders. You must absolutely not view the events here as a sequence that is separate from your own life. Between the beautiful and spectacular moments in the Bay, you’ll discover the same alienation and exploitation that characterizes your own situation. Please do not consume the images from the Bay as you would the images of overseas rioting or as a netflix subscription. Our hell is yours, and so too is our struggle.

And so please… if you love us as we believe you do, prove it. We wish so desperately that you were with us in body, but we know most of you cannot be. Spread the commune to your own locales. Ten cities have already announced their intentions to hold solidarity demonstrations tonight. Join them, call for your own. If you aren’t plugged into enough of a social force to do so, then find your own ways of demonstrating. With your friends or even alone: smash, attack, expropriate, blockade occupy. Do anything in your power to spread the prevalence and the perversity of our interruption.

for a prolonged conflict; for a permanent presence; for the commune;

some friends in Oakland.

This entry was posted in General. Bookmark the permalink.